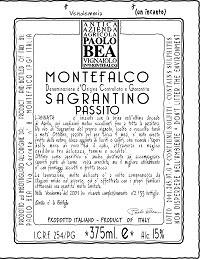 "This rare and very special wine, made exclusively from Sagrantino, is harvested late and left to raisin for four months before pressing. As it air dries, a white mold forms that balances and concentrates the acid, sugar and tannins. The grapes, as raisins, contain approximately 30% sugar at this point (January of the following year) and they are then de-stemmed and crushed. Fermentation begins and slowly progresses until the sugar level reaches 16% to 18%; pressing then takes place and the resulting wine carries approximately 90 grams of residual sugar. The wine is then aged in stainless steel for four years or more and then an extra in bottle prior to its commercial release. The Sagrantino Passito is not produced every year and, when it is made, 1000 to 2000 half bottles are produced." Winemaker Notes