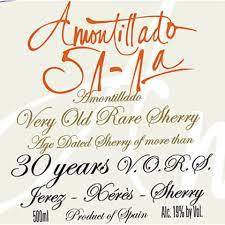 Vinos de Jerez Osborne RARE VORS. Founded in 1903 by the Count of Osborne, Don TomÃ¡s Guezala to commemorate the birth of his son Antonio. The solera takes its name from Antonio Osborne's initials and the S for "Solera". The Count was explicit in his order that the wine should not be bottled until 1924, the year in which his son would turn 21.